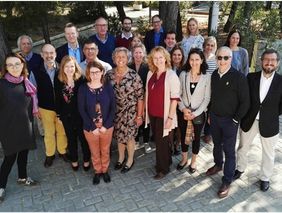 On 4 and 5 April, the annual meeting of the Council of European BioRegions (CEBR) took place in Athens. In addition to the election of the Board of Directors, CEBR set itself the goal of increasing visibility and influence in Europe in 2019. Dr. Stephanie Wehnelt of BioM was elected President for a further three years.

At the CEBR annual meeting the partners analysed the activities carried out in 2018 and discussed the strategy for the coming years. Furthermore, the newly elected board members confirmed Dr. Stephanie Wehnelt, Head of International Affairs of BioM as President.

The annual meeting also focused on the presentation of Safe-N-Medtech, a large European 15 million project in which CEBR will be a core partner for the next four years. In this open innovation testbed in the field of nano-activated medical technologies, CEBR will develop a large part of the tasks of communication, exploitation strategy and international networking.

Four CEBR working groups will also be set up in the coming weeks on the topics of microfinance, relations with the European Commission, further development of the role of cluster management and cluster purchasing structures.

The main objective of CEBR is to represent the interests of coordinators of life science clusters and ecosystems vis-à-vis key stakeholders such as the European Commission and to exploit funding opportunities. CEBR is also expanding its potential as a powerful European cluster platform capable of maximising networking and collaboration between its members. To this end, the number of members and the visibility and presence at the European Commissionis is to be increased. The aim is to influence the development of future programmes to support European life science ecosystems and their managers, to improve the framework conditions for the further development of the European SME life science environment and to become the central voice for such ecosystems.

If you are interested in joining the CEBR Association of European Bio-Regions, please contact Anaïs Le Corvec, CEBR Manager, info@remove-this.cebr.net.

Press release: CEBR renews its board and aims to increase visibility and influence throughout Europe