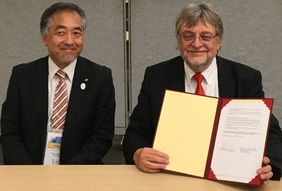 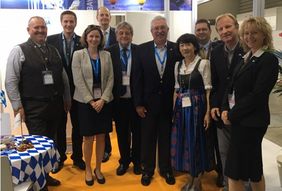 Bavarian exhibitors at the German Pavilion at BioJapan 2018. 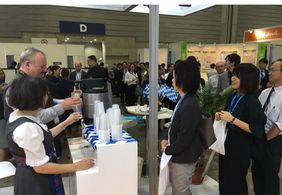 The Bavarian beer at the BioJapan reception of the German Pavilion is well received.

This year BioM accompanied two groups of entrepreneurs to Japan. The programme included the EU-Japan BioPharma Partnering Conference in Osaka on 9 October, followed by BioJapan in Yokohama on 10 to 12 October. An important part of the programme was the official extension of the cooperation agreement between BioM and Osaka Bio Headquarters until 2022.

Together, the cooperation partners want to further promote and strengthen the regions of Bavaria and Kansai (Osaka, Kobe, Kyoto) in the field of biotechnology and life sciences. Prof. Horst Domdey, Managing Director of BioM, greatly appreciates the cooperation: "The Kansai Region is a traditionally innovative hub and has produced outstanding personalities such as this year's Nobel Laureate in Medicine, Prof. Tasuku Honjo. We are very delighted to be able to continue the valuable collaboration with Osaka as a central player of the Kansai Region".

Dr. Kazuhide Nomura, Associate Director, Northern Osaka Bio Medical Cluster added: "We are very pleased to extend the cooperation agreement with BioM for the second time. Together, we regularly provide business matching opportunities for each region's companies. We hope that this German-Japanese cooperation will lead to long-term success in the life science field".

At the Partnering Conference in Osaka, 67 representatives of European companies from 15 countries met with 51 Japanese companies for a total of 278 1-on-1 meetings to explore possible cooperations. Within the EIT Health project Start.Smart.Japan, co-organized by Biocat, BioM accompanied nine Bavarian SMEs to the conference, three of them from Bavaria.

The Osaka Partnering Conference was developed three years ago by BioM together with the Osaka BioHeadquarters partner cluster and the Osaka Prefecture, later supported by bioXclusters. In the meantime, the EU-Japan Center has become the major organizational partner.

After the Osaka event, BioM subsequently accompanied nine Bavarian companies to Yokohama for BioJapan where BioM represented the Bavarian Biotechnology Cluster at the Bavarian booth, organized by Bayern International, as part of the German Pavilion. The largest trade fair and partnering event for biotechnology in Asia offered further opportunities to make contacts and initiate partnerships.

Dr. Maria Lamottke, President of the Board of Directors of Bicoll, came as a participant of Start.Smart.Japan to Yokohama. The project has been specially developed for start-ups, scale-ups and SMEs whose goal is to enter the Japanese life science market. Lamottke was very positive about the fair: "For the first time, we were able to hold in-depth discussions with Japanese partners, which could only take place at BioJapan. BioM's preparation for this was excellent."

Dr. Edgar Fenzl, Managing Director of FGK Clinical Research GmbH, was represented as sub-exhibitor at BioJapan and was very pleased with the development of the fair: "Compared to recent years, there are more international participations at this year's BioJapan. The Japanese representatives are also more open-minded towards foreign companies."