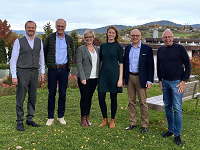 Seed investors and founders look forward to the journey together. © Dermagnostix

The Friedberg-based diagnostics start-up Dermagnostix successfully completed its seed round and raised a seven-digit sum. This is to bring their first test system PsorEx-LabDisk to market maturity.

The diagnostics start-up Dermagnostix GmbH located in Friedberg has successfully closed its seed round and raised a seven-figure amount. The financing round was supported by a selected network of investors from the medical and financial sectors. The new capital will be used to complete development and prepare for market entry.

"Modern molecular diagnostics are a prerequisite for implementing precision medicine in dermatology. It not only supports conventional diagnostics, but also makes it possible to predict individual therapy response and course of disease," explains CEO, dermatologist and co-founder Dr. Natalie Garzorz-Stark, adding: "Unfortunately, manual performance of complex DNA- and RNA-based assays is time-consuming, error-prone and requires expertise, which is why large implementation could not be achieved to date.”

Dermagnostix revolutionizes diagnostics in dermatology with its fully automated "lab-in-a-box" system, a fully automated, cost-effective microfluidics-based diagnostic platform for dermatology that enables the technically valid performance of complex molecular assays.
The system is based on the molecular test "PsorEx" patented by Helmholtz Munich and TU Munich for differentiating between psoriasis and eczema.
Together with Hahn-Schickard in Freiburg and their LabDisk platform, the idea was technically optimized. The seven-figure sum will now be used to bring the system to market maturity with Dermagnostix’ first test PsorEx-LabDisk.

"Our LabDisk technology is based on smart centrifugal microfluidics and makes it possible to measure 40 markers and more simultaneously within 60 to 90 minutes, even in solid tissue such as the skin," describes CTO and co-founder Dr. Katharina Dormanns, who previously headed the LabDisk platform group at Hahn-Schickard.

System with a high degree of innovation

The degree of innovation of the system and also its application for diagnostics not only convinced the investors in this seed round, but was also recognized by numerous juries.
With the help of competitive third-party funding amounting to 3 million euros in the pre-founding phase, the system was developed to functional model maturity. Numerous prizes in business competitions and inclusion in exclusive networks such as BayStartUP, WECONOMY and CDL Oxford have enormously expanded the reach of the fledgling spin-off within just a few months since its founding in 2021.

"It is a great advantage and very motivating that we have gained experienced and well-connected investors with regulatory, financial and medical expertise to support us in our mission to bring molecular diagnostics in dermatology to everyone, everywhere," the founders enthuse.