Munich and Kawasaki City today signed the extension of their Memorandum of Understanding on the Promotion of Business Exchanges. 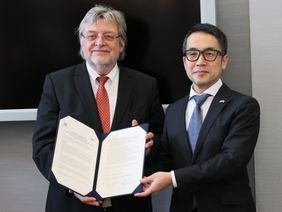 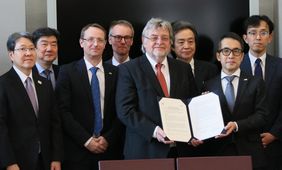 The representatives of the Biotech Cluster Organizations of Munich, Germany, and Kawasaki City, Japan, today signed the extension of their Memorandum of Understanding on the Promotion of Business Exchanges. After the first MoU was signed in 2017, a number of successful joint activities followed to initiate and accelerate business cooperation between the life science communities of both regions.

Kawasaki City, with its world-class open-innovation site King Skyfront, and the cluster management organization BioM, which coordinates the Munich and Bavarian Biotechnology Clusters, decided to continue their active cooperation scheme, which includes matching support for cooperation projects, an exchange of information about each region’s new technologies, industry developments and academic potential, and an exchange of best practices in technology transfer and biotech SME support. This will help to identify and strengthen industry-industry and industry-academy partnerships between the two regions.

Mayor of Kawasaki City, Mr. Norihiko Fukuda, who could not accompany the delegation and who signed the MoU beforehand in Kawasaki, stated: “In November, 2017, BioM and Kawasaki City signed an MoU on the Promotion of Business Exchanges. Ever since, Kawasaki City has been promoting exchange of information on cluster organizations in both regions on a regular basis as well as conducting events and business network meetings for the companies in Kawasaki and Bavaria to develop R&D start-up projects. It is a great honor and a significant opportunity for Kawasaki City to be able to renew its Memorandum of Understanding with BioM, as our city hopes to reinforce its partnership and accelerate our activities within the alignment. Under the framework of our MoU, I look forward to seeing companies in both of our respective districts to make progress in research and development and to put these achievements into effect in our society to help tackle social issues. At the same time, I trust that our partnership will be strengthened and greater prosperity is brought to Bavaria and Kawasaki.”

Prof. Dr. Horst Domdey stated: “Based on our cooperation agreement and our expanded activities, our vision is to eventually run joint research and development programs as a contribution to the development of the medicine of the future.”

The Bavarian Ministry of Economic Affairs, Regional Development and Energy, supports the cooperation and hosted the signing procedure. The Ministry welcomes the cooperation agreement and Dr. Manfred Wolter, Head of the Department for Innovation, Research, Technology and Digitalization, states: “I am convinced that, through the continuing and very fruitful cooperation between BioM and Kawasaki City, the relations between Bavaria and Japan will intensify further and strengthen the innovation power of both economies.”

During the signing ceremony in Munich, Dr. Christian Geltinger emphasized in his greeting to both parties: “Successful business in Japan is based upon sustained commitment and mutual trust. Those from Kawasaki City and BioM involved in the MoU demonstrate this in an exemplary manner.”

About the Kawasaki Biotechnology Region
Kawasaki is one of the most dynamic major cities in Japan. Located in the center of Keihin Industrial Zone, it plays an important role in the growth of the Japanese economy.
Kawasaki City is making a significant effort to form a hub for innovation in order to keep up with the continuously changing structure of global economy and its industries, especially within the life science field. As a result, Kawasaki City established “King Skyfront”, an open-innovation site and home to world-class research and development facilities in the region. “King Skyfront” aims to contribute to tackling global issues in a variety of fields, including life, environmental, and welfare sciences, as well as creating global business opportunities.

About the Munich Biotech Cluster
The State of Bavaria is the southernmost part of Germany with its capital Munich. The life science sector (biotech, pharma, CROs, suppliers and others) of the Greater Munich Area unites more than 33,000 persons employed by more than 410 companies, making Munich one of the leading biotech regions in Europe.
The region is mainly characterized by innovative biotech SMEs, where the majority started as spin-offs from one of the local world-renowned research institutions. Two incubators in close vicinity to the universities are giving a home to about 80 innovative biotech start-ups and other players, which they need to foster their innovative ideas. BioM Biotech Cluster Development GmbH, coordinator of the Munich and Bavarian Biotech Cluster, is located in Martinsried and provides access to the Bavarian network for international business partners, as well as coaching, training and other services for companies, crucial for the long-term success of the region’s innovative life science SMEs.