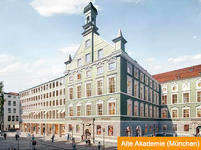 Swiss pharmaceutical giant Novartis is building another German site in the heart of Munich. The decisive factor was the strong biotechnology network in the greater Munich area, which Novartis Germany CEO Heinrich Moisa sees as leading in Europe.

Novartis Pharma GmbH, which belongs to Novartis AG of Basel, Switzerland, is one of the leading research-based pharmaceutical companies in Germany. By taking the step of opening another administrative headquarter in Munich, the group aims to become more closely rooted in the biotechnology and pharmaceuticals sector, which is very strong locally, and to take advantage of its proximity to Munich's universities and research institutions.
From 2024, around 500 employees are expected to move into the converted Alte Akademie in Munich's pedestrian zone. The company will open a temporary office in a co-working space in Munich as early as the beginning of 2022.

"We are committed to Bavaria as a location in which we are firmly rooted," said Heinrich Moisa, Managing Director Oncology and Chairman of the Executive Board Novartis Germany. Thomas Lang, MD, CEO of Novartis Pharma, added: "We are opening up additional entrepreneurial opportunities by establishing a site in the innovation and business metropolis of Munich."

Novartis wants to establish a network model with a station-to-station concept between the new administrative headquarters in Munich, the German headquarters in Nuremberg and the office in Berlin. This provides the best conditions for further growth and collaboration with partners, Heinrich Moisa said.
Novartis is taking innovative approaches to collaboration. With its 'Choice with Responsibility' employee program, Novartis has allowed its employees to choose where they work and when they meet in the offices since 2020.
The Novartis network model now continues this consistently and offers associates the choice of work location between Nuremberg and Munich. Part of the concept is the central downtown location of all three offices near the train station, making them easily accessible and interconnected.
In addition, there are other German sites of the Novartis divisions, in particular Sandoz/Hexal in Holzkirchen, as well as production sites in Wehr, Barleben, Osterweddingen and Rudolstadt with a total of around 7,000 employees in Germany.