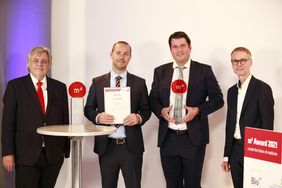 Prof. Heiko Lickert from Helmholtz Munich and winner of last year's pre-seed competition m4 Award, has been awarded the prestigious ERC Advanced Grant. With his project BetaRegeneration, he aims to advance new therapies against diabetes.

In Germany, more than 8.5 million people currently suffer from the metabolic disease diabetes mellitus. The common disease is characterized by the loss or malfunction of insulin-producing beta cells in the pancreas. A cure is not possible, and the disease can so far only be treated symptomatically.

Prof. Heiko Lickert wants to change this. He is Professor of Beta Cell Biology at the Technical University of Munich (TUM) and Director of the Institute of Diabetes and Regeneration Research at Helmholtz Munich. He has now received an ERC grant for his research project BetaRegeneration. Lickert aims to elucidate the cellular and molecular mechanisms associated with beta cell protection and regeneration.

2021 Prof. Lickert and his team received the m4 Award initiated by BioM in 2011 with the BetaRegeneration project. With the pre-seed award the Free State of Bavaria promotes innovative products, technologies or services of young companies that decisively advance the further development of medicine of the future. The prize is awarded every two years. In the five rounds of competition so far, a total of 25 research projects have received awards. Nine spin-offs have been realized since then.

In addition to Lickert, other top researchers from the life sciences in Bavaria received awards:

ERC Advanced Grants are endowed with up to 2.5 million euros for a period of 5 years. The European Research Council awards these grants to outstanding top researchers who distinguish themselves by the originality and significance of their research contributions and who can demonstrate a considerable number of research results in the last 10 years.