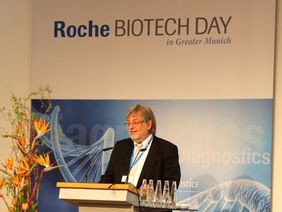 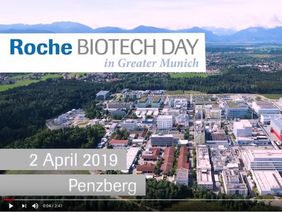 At the first edition of the Roche Biotech Day, renowned experts provided information on current trends for the future of biotechnology. The spectrum ranged from synthetic biology, new molecule formats and artificial intelligence to personalised vaccines and individual genome analysis.

Around 100 scientists from Munich universities, research institutes and biotech companies accepted Roche's invitation and met with around 150 Roche scientists for the premiere of Roche Biotech Day at the beginning of April on the Penzberg Roche Campus. The event was realized in cooperation with BioM, the network organization of the biotechnology industry in Munich and Bavaria. The symposium with an evening get-together and a large poster session offered everyone a good opportunity for productive scientific discourse and networking. With this event, Roche also wanted to signal that the company is continuing to open up to cooperation in the region and to help shape the future of biotechnology.

The presentations not only dealt with classic aspects in the biotech environment, but also covered a much broader spectrum. This was the case with the lecture by Petra Schwille, who presented basic research in the field of synthetic biology. The director of the Max Planck Institute for Biochemistry investigates how the first cells were created billions of years ago. For this purpose, she wants to create a system from simple biological components that replicates itself - an artificial "primordial cell". It started with the membrane envelope, as she reported in Penzberg. However, there is still a long way to go to answer the major questions of biology. "We still don't understand what life is," emphasized the Max Planck director.

New therapies with viruses, DutaFabs and vaccines
The presentations, in which completely new classes of therapeutic agents were presented, led into applied research. Martin Steegmaier, Head of Discovery at Roche Pharmaceuticals Research, gave an insight into the company's pipeline. "More than 80 percent of the portfolio consists of new antibody formats," reported Steegmaier. These include, for example, T-cell bispecific antibodies that attach themselves to a tumor with two binding sites and attract T-cells via a third binding site. The DutaFab formats are highly innovative. These antibodies can carry two different binding sites on each arm.

Andreas Plückthun's approach is visionary. The co-founder of MorphoSys and Molecular Partners is professor at the University of Zurich and a driving force in the development of new antibody and protein formats. As a continuation of his work, he presented modified adenoviruses that specifically infect tumor cells and lead them to produce therapeutic antibodies against themselves. In animal models, Plückthun has even been able to achieve a reduction in tumor tissue.

Christoph Kröner from BioNTech reported that the dream of a vaccine against cancer, long cherished by biotechnologists, is now becoming reality. An RNA-based vaccine, which is produced individually for each patient, was able to convince in clinical tests with melanoma patients. Preparations for a large clinical trial are currently underway in collaboration with Genentech.

Disease Patterns in Change and Price Explosion for Therapeutics
Günter Jagschies from GE Healthcare Life Sciences brought a completely different perspective on biomedicine into the discussion. He postulated to reconsider the priorities in the development and manufacture of therapeutics. He also directed his attention to Asia and Africa. In contrast to developed countries with a high proportion of age-associated diseases, around 1.5 billion people are affected by diseases that the UN classifies as "neglected tropical diseases". If patients with malaria, tuberculosis and HIV are included, around 3.5 billion people suffer from infectious diseases - almost half of the world's population. Günter Jagschies therefore called for more research on vaccines and neglected tropical diseases.

In the treatment of diseases such as cancer, precision medicine should be further expanded, he emphasized. However, the high treatment costs are a major problem. He showed several examples of biopharmaceutical therapies that cost several hundred thousand dollars per year. Here, too, there is a great need for action to make highly effective therapies available and affordable for many.

From special laboratory to routine diagnostics
The future of diagnostics lies in big data and high-tech systems, as the speakers at the Biotech Day impressively demonstrated. Joachim Eberle from Roche Diagnostics Research explained that the analysis of large amounts of data is playing an increasingly important role in the development of new tests. He also revealed that Roche is now working on a new diagnostic platform based on mass spectrometry. This means that this precise analytical method, which was previously only available in special laboratories, will now also be available in routine diagnostic laboratories.

Similar to mass spectrometry, Raman spectroscopy was also reserved for specialists for a long time. Jürgen Popp from the Leibniz Institute for Photonic Technologies in Jena presented a chip on which antibiotic resistance can be determined in a patient sample using Raman spectroscopy. So far, the bacteria from the sample must be cultivated for at least 24 hours. With the new technology, the result is available in less than three and a half hours.

The revolution has already arrived in practice at Foundation Medicine (FMI). Vera Grossmann, FMI Manager Germany, explained how far personalized cancer diagnosis has already progressed. FMI routinely analyzes tumor samples from patients for over 300 tumor-specific genes. Based on this, FMI can help identify potentially effective therapy options or studies to support individualized therapy stratification. A comprehensive medical report explains the biological and clinical relevance of each identified genetic modification with the aim of supporting therapy decisions.

In the end, the patient's data benefits the individual patient - an example of how artificial intelligence, data science and biotechnology can interact successfully in the future.