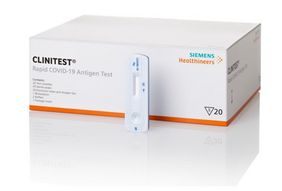 The Erlangen-based medical technology group Siemens Healthineers is launching a rapid antigen test for the detection of SARS-CoV-2. According to its own statements, the result should be available within 15 minutes.

Corona antigen rapid tests are based on the detection of SARS-CoV-2 proteins - in contrast to PCR tests which detect RNA, the genetic material of the virus. Both tests require a smear in the nasopharynx. The simpler evaluation of an antigen test also allows testing outside a laboratory, e.g. in a nursing home or doctor's practice. However, all rapid antigen tests currently on the market must be performed by trained medical staff.

Siemens Healthineers is now launching such a rapid antigen test. According to the Siemens subsidiary, the CE-marked test, which was developed and tested by a partner, showed in a clinical study a 96.72% sensitivity and 99.22% specificity. The sensitivity indicates the percentage at which the test actually detects an existing infection. Specificity tells you how many healthy people are actually detected by the test. The study was carried out at six different locations with 317 people tested. CE certification means that the test is approved in all countries that recognize such CE certification - which is mainly the European Economic Area. In order to offer the test in other regions, Siemens Healthineers plans to apply for emergency FDA approval.

After a sample has been taken from the nasopharynx for the test, the swab is inserted into a tube with special fluid. This liquid is then applied to a test cassette, which should give a positive or negative result within 15 minutes.

"With our test, we want to make a contribution to risk reduction, especially in places with heavy traffic and where people often congregate," said Dr. Christoph Pedain, Head of Point of Care Diagnostics at Siemens Healthineers. "This rapid antigen test allows testing for more people in a wide variety of environments - especially in places where people need to be tested quickly, such as airports, or in places with limited access to laboratory resources, such as schools".

Coronavirus testing regulation of the Ministry of Health

Federal Health Minister Jens Spahn had already announced at the beginning of October that he would significantly increase the number of rapid corona tests in nursing homes and hospitals in order to better protect risk groups from the corona virus. A test regulation now specifies the conditions under which the rapid antigen tests will be paid for by health insurances. However, according to the Federal Ministry of Health, PCR tests remain an essential part of the test strategy due to their high reliability.

The Federal Ministry of Health (BMG), the Federal Institute for Drugs and Medical Devices (BfArm) and the Paul Ehrlich Institute (PEI) provide information on their homepages about rapid antigen tests and the new test regulation, which came into force on 15 October: