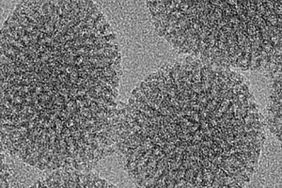 The porous nature of the silica nanoparticles allows entrance of NSA molecules, where they are taken up by immune cells and NSA is released to stop the inflammatory processes. © UNIGE - Carole Bourquin

How can a drug be delivered exactly where it is needed, while limiting the risk of side effects? A team from the University of Geneva (UNIGE) and the Ludwig-Maximilians-Universität München (LMU) has succeeded in developing a fully biodegradable nanoparticle capable of delivering a new anti-inflammatory drug directly into macrophages - the cells where uncontrolled inflammatory reactions are triggered - ensuring its effectiveness. In addition, the scientists used an in-vitro screening methodology, thus limiting the need for animal testing.

Inflammation is an essential physiological response of the body to defend itself against pathogens such as bacteria. It can become problematic when it turns into a chronic condition, such as in cancers, autoimmune diseases or certain viral infections. Many treatments already exist, but their action is often not very targeted, high doses are required and deleterious side effects are frequent. Macrophages, large immune cells whose natural function is to absorb pathogens and trigger inflammation to destroy them, are often involved in inflammatory diseases. When overactivated, they trigger an excessive inflammatory response that turns against the body instead of protecting it.

The use of nanoparticles to encapsulate a drug to protect it and the body until it reaches its point of action is being increasingly studied. However, this requires identifying the right nanoparticle for each drug according to a series of precise parameters.

Necrosulfonamide (NSA) is a new molecule that inhibits the release of several important pro-inflammatory mediators, therefore constituting a promising advance to reduce certain types of inflammation. However, being extremely hydrophobic in nature, it travels poorly in the bloodstream and could target many cell types, triggering potentially toxic effects.

‘‘This is why this molecule is not yet available as a drug,” says Gaby Palmer, a professor in the Department of Medicine and the Geneva Centre for Inflammation Research at the UNIGE Faculty of Medicine, who codirected the study. “Using a nanoparticle as a transport vessel would circumvent these shortcomings by delivering the drug directly into macrophages to combat inflammatory overactivation in the place where it begins.’’

Three nanoparticles under the microscope

The scientists tested different porous nanoparticles, with the main criteria being a reduction in toxicity and in the required dosage, as well as the ability to release the drug only once the nanoparticle has reached the interior of the macrophages. ‘‘We used an in vitro screening technology which we developed a few years ago on human and mouse cells. This saves time and greatly reduces the need to use animal models,’’ explains Carole Bourquin, a professor at the UNIGE’s Faculties of Science (Institute of Pharmaceutical Sciences of Western Switzerland) and Medicine (Department of Anaesthesiology, Pharmacology, Intensive Care and Emergencies, Translational Research Centre in Oncohaematology, Geneva Centre for Inflammation Research), who codirected this work at UNIGE.

The porous silica nanoparticle finally met all the criteria: fully biodegradable, of the right size to be swallowed by macrophages, and able to absorb the drug into its numerous pores without releasing it too early.

Other silica nanosponges developed by the German-Swiss team had already proven their effectiveness in transporting anti-tumour drugs. ‘‘Here, they carry a very different drug that inhibits the immune system,’’ says Carole Bourquin. ‘‘Mesoporous silica is increasingly revealing itself as a nanoparticle of choice in the pharmaceutical field, as it is very effective, stable and non-toxic. Nevertheless, each drug requires a tailor-made carrier: the shape, size, composition and destination of the particles must be reassessed each time.”

The combination of this potent anti-inflammatory drug and these mesoporous silica nanoparticles shows a promising synergism which is further studied by the team.