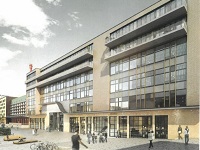 The Bavarian Ministry of Economic Affairs is funding the WERK1 digital start-up center in Munich with a total of 22.4 million euros over the next six years. Under the project name WERK1.4, the space is to be expanded to around 10,000 square meters.

The WERK1 digital start-up center in the new Werksviertel district near Munich's Ostbahnhof station supports young digital entrepreneurs with office space, co-working spaces, meeting and event areas, individual coaching and many networking opportunities.
BioM's live discussion panel FORUM Science & Health gets also recorded in WERK1's event space.
Over the next six years, WERK1 will receive a total of 22.4 million euros in funding from the Bavarian State Ministry of Economic Affairs, Regional Development and Energy. This is to finance the planned expansion to around 10,000 square meters under the project name WERK1.4.

A total of 57 new start-up offices, four scale-up offices and 63 fully equipped co-living apartments are to be built. Move-in is planned for 2023. Bavaria's Minister of Economic Affairs Hubert Aiwanger sees the funding as a very good investment for Bavaria as a start-up location.

Bavaria's Minister of Economic Affairs Hubert Aiwanger: "Start-ups are in the best hands with their business ideas at WERK1. We want to build on this in the coming years. Our support for the business incubator in Munich's Werksviertel is an investment well made. I am convinced that consistent support for the start-up infrastructure is a top priority for the future of Bavaria as a business location. I am very pleased about the strong impetus coming from our digital start-up centers throughout Bavaria."

In addition to start-up offices, co-working spaces and a new WERK1 Café, there will also be more meeting and event spaces as well as scale-up offices after the expansion.
A scale-up is the next stage when a start-up is already operating successfully and establishing itself further in the market.

Dr. Florian Mann, Managing Director of WERK1.Bayern GmbH: "The new funding for WERK1 is a strong signal for the start-up scene and the entire high-tech location of Munich. In addition, the offering will be expanded to include a co-living concept. By expanding our offering and doubling our space, we are offering founders even more opportunities to realize their ideas. We are particularly proud of the future co-living offer. This is an absolute novelty for the Munich start-up scene."

The co-living concept is about temporary living, which is becoming increasingly popular, especially in urban centers. With co-living, work and life will move even closer together in the future.
The fully equipped apartments in WERK1.4 will have their own bathroom and a so-called pantry kitchen. In addition, communal areas invite people to cook, linger and work.
The aim of the concept is to enable startups throughout Munich to find more national and international employees and offer them affordable accommodation for several months in a special and inspiring environment.

WERK1 is one of 19 digital incubators across Bavaria funded by the Bavarian Ministry of Economic Affairs.