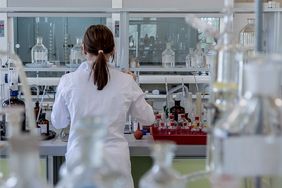 With projects ranging from energy research to the fight against cancer, a total of 16 young scientists at Friedrich-Alexander-Universität Erlangen-Nürnberg (FAU), Ludwig-Maximilians-Universität München (2), Technische Universität München including Klinikum Rechts der Isar (12) and the University of Regensburg have acquired the prestigious ERC Starting Grants 2022 from the European Research Council (ERC).

A total of 408 researchers have received Starting Grants from the European Research Council (ERC) this year. The grants total EUR 636 million and are part of the Horizon Europe program. They are awarded to help excellent younger scientists who have 2 to 7 years of postdoctoral experience to start their own projects, form teams and pursue promising ideas.

In the SYNSEMBL project, Henrike Niederholtmeyer aims to pioneer the synthesis, characterization, and activity research of biomolecular condensates, as well as pave the way for their application. Thorsten Kessler's team wants to analyze the molecular mechanisms in the extracellular matrix, the scaffold in which cells are arranged, in even greater detail and identify starting points for new drugs against cardiovascular diseases. In the MitoPIP project, Angelika Harbauer and her team will be investigating the functioning of mitochondria in nerve cells, or more precisely, the mechanisms and signaling pathways surrounding the protein synaptojanin, in order to better understand the processes of disease development and the mode of action of drugs.

Other funded projects from Bavaria

Science Minister Markus Blume congratulated: "Great scientific careers begin in Bavaria: 13 ERC Starting Grants are nationwide tops! Our excellent universities are training top-class talents who are doing pioneering research: be it in the field of interfaces for solar energy conversion, on modeling approaches for machine learning, or contributing to research in the fight against cancer. Congratulations to all the award recipients and the successful universities!"

About the ERC Starting Grants
The ERC Starting Grants are prestigious grants of up to 1.5 million euros for outstanding research projects. It is awarded annually to scientists who are still at the beginning of their careers. The money is used, among other things, to set up an academic working group for the respective award-winning research project. Of this year's total of 408 winning projects from eligible countries, 81 are being led by researchers in Germany.