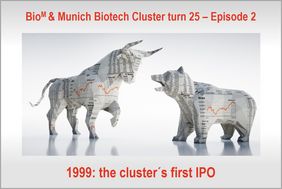 The IPO on the Frankfurt Stock Exchange in 1999 was an important milestone for the Planegg-based company, which specializes in the discovery, development, and delivery of innovative cancer medicines.

In 2017, Tremfya® was the first drug based on MorphoSys' antibody technology to receive regulatory approval. In 2020, the U.S. Food and Drug Administration (FDA) granted accelerated approval for the cancer drug Monjuvi® (tafasitamab-cxix).

Most recently, the flagship of the Munich Biotech Cluster 2021 received conditional approvals for Minjuvi® (tafasitamab) in the European Union and Canada.

The Company's shares are included in the SDAX and TecDAX and are listed on the Frankfurt Stock Exchange as well as on the NASDAQ Stock exchange in the United States.

In 2000, Medigene went public on the stock market

Medigene AG, headquartered in Martinsried near Munich, has been listed on the Frankfurt Stock Exchange since 2000 and develops immunotherapies to enhance T-cell activity against solid cancers.

In 2006, Medigene's product Veregen® became the first FDA-approved biopharmaceutical from a German biotech company in the US. Currently, various product candidates are in clinical development.

Medigene's shares are listed in the Prime Standard of the German Stock Exchange.

Currently, 7 listed biotech companies are located in the area of the Munich Biotech Cluster. In addition to MorphoSys and Medigene, these are 4SC, Immatics, Immunic, Formycon and Pieris.