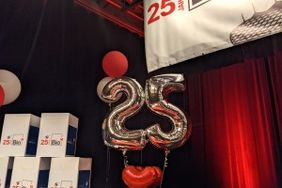 On July 27, BioM and the Munich Biotech Cluster celebrated their 25th anniversary. Together, they can claim a great success story. With the support of the biotech cluster management organization, the life science region has become one of the most successful biotech hotspots in Europe. At the celebration event in the Kupferhaus in Planegg, around 250 invited guests from industry, science and politics came and looked back on the joint achievements as well as on a promising future.

It all started in 1997: BioM was founded to strengthen Munich's biotechnology sector after Munich had won the BioRegio competition of the German Federal Ministry of Research and Technology (BMFT) a year earlier. Since then, BioM has been acting as the cluster management for the biotechnology industry in Munich at the Martinsried campus. In the meantime, the Munich biotech cluster with its more than 220 biotech companies and over 19,000 employees has developed into one of the most successful European biotech clusters. 12 drugs from companies based in Munich have been approved to date. Munich is also a hotspot for the start-up scene: over the past 25 years, numerous companies have been founded in the field of biotechnology, many of which BioM has supported.

Prof. Horst Domdey, managing director of BioM, is very pleased with the successful work of BioM and the Munich Biotech Cluster over the past 25 years: "The innovation-driven Munich Biotech Cluster has an exceptionally high scientific and entrepreneurial potential, which is fed by the many excellent research institutions. BioM will continue to do everything possible to leverage this potential, to support the activities that emerge from it and to jointly lead them to success. Thus, the next 25 years should continue to be very exciting!"

Roland Weigert, State Secretary in the Bavarian Ministry of Economic Affairs, Regional Development and Energy congratulated: "Bavaria is the leading location for biotechnology in Germany and Munich is a top international address for companies in the sector. This success is also the result of our close and valuable cooperation with BioM. Bavaria recognized early on that biotechnology is a key technology for the entire 21st century."

This success story was reviewed by pioneers and companions in four rounds of talks at the ceremony.

Dr. Otto Wiesheu, former Bavarian Minister of Economic Affairs, MorphoSys founder Dr. Simon Moroney, Dr. Erwin Soutschek, founder and CEO of Mikrogen, and Medigene founder Dr. Peter Heinrich kicked off the program. They looked back on the beginnings and achievements of BioM and the Munich Biotech Cluster. They agreed that these successes require a willingness to take risks, good nerves and a staying power.

Prof. Ernst-Ludwig Winnacker, the father of Bavarian biotechnology and a major pioneer, gave insights via video message into how he expanded research to include the aspect of innovation. He highlighted the importance of interdisciplinarity. Bringing together all the players at the site would increasingly attract further investors. Overall, he sees a promising future for the Munich biotech cluster.

The successful companies of the first hour all emerged as spin-offs from Munich's excellent science scene. The basis for this perfect ecosystem is the ideal mix of science and entrepreneurship that leads to innovation. Science representatives Prof. Matthias Tschöp, Scientific Director of Helmholtz Munich, Prof. Karl-Peter Hopfner, Director at the Gene Center Munich, Prof. Petra Schwille, Director of the MPI of Biochemistry and Prof. Ulrike Protzer, Head of the Chair of Virology at the Technical University of Munich spoke on the topics of start-up dynamics, financial resources for science and the new building of the Max Planck Institutes in Martinsried. In this regard, there has been a cultural shift toward translational implementation, a willingness to promote excellence, and collaborations for mutual success.

Developing and finally marketing drugs or diagnostics is a lengthy and cost-intensive process. Thus, it is first necessary to convince investors of the developed product. Dr. Peter Neubeck, Partner at Kurma Partners, Dr. Georg Ried, Managing Director of Bayern Kapital, Dr. Kathrin Ladetzki-Baehs, CEO of Adivo and Tubulis co-founder Dr. Dominik Schumacher - experienced founders as well as investors - discussed which hurdles have to be overcome and which framework conditions they would like to see in order to simplify financing in the biotech scene. There was consensus that hurdles to early-stage investments or company spin-offs must be removed and public support strengthened.

An outlook on the future of biotechnology, especially in Munich, was provided by the last round of talks with Planegg's mayor Hermann Nafziger, Prof. Stefan Engelhardt, co-initiator of C-NATM, Julia Moosbauer, founder and COO of deepc, and Roland Weigert, Bavarian State Secretary and Deputy Minister of Economic Affairs. As a cross-sectional science, biotechnology has the potential to open up new markets and thus generate added value for society's benefit.

How the next 25 years might look like, the guests talked about in a relaxed atmosphere at the following get-together.

Please find pictures of the anniversary event here in our gallery.

Picture material on request to: presse@bio-m.org