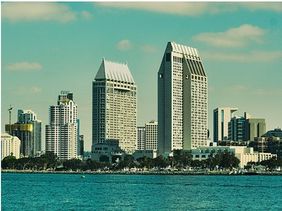 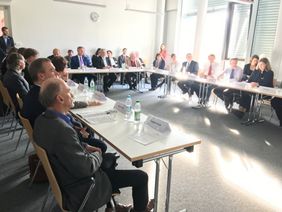 Round table disussion at BioM on personalized medicine with delegates of the Munich Life Science scene. © BioM

During a delegation trip of several days to Frankfurt and Munich, the World Trade Center San Diego visited the Munich Biotech Cluster on 23 October 2019 with the aim of generating and strengthening global life science partnerships.

The World Trade Center San Diego is an organization dedicated to growing international trade and investment opportunities for the San Diego region. At a time of increasing global uncertainty, the organization is interested in long-term relationships with Europe to support San Diego's economy.

Germany is increasingly becoming one of San Diego's most important trading partners. According to data collected by World Trade Center San Diego, German-based companies, including Evotec, BioNTech and Medigene in Martinsried, employ more than 2,700 people in San Diego. And like San Diego, Munich has also developed into a centre for life sciences and biotech.

During a tour through the Life Science Campus Großhadern-Martinsried, the delegation visited the department of Prof. Matthias Mann at the Max Planck Institute of Biochemistry as well as the company GNA Biosolutions at the IZB. In a round table discussion at BioM, the progress and future potential of personalized medicine were discussed with about 20 representatives of the Munich life science scene. At the following reception in the Faculty Club G2B, to which Evotec had invited, its CEO Werner Lanthaler and David Weitz, Head of Takeda California and Global Research Externalization, presented the recently started cooperation between the two companies. In a relaxed atmosphere, the delegation participants from San Diego then exchanged ideas with around 40 invited guests from the Munich life science scene.

Prof. Horst Domdey, Managing Director of BioM, saw the meeting as a great opportunity for a more intensive cooperation between Munich and San Diego: "The meeting was enormously important for both regions and a valuable basis for a stable relationship. I am already looking forward to the next step at the next BIO International Convention, which will take place in San Diego in June 2020".